One thing I find lacking here (compared to slack / matrix / FB and Discord) is the ability to react with more than one type of “like”.

I do not need the full-emoji-set (although that’s a nice/fun feature). For me, there are specifically two kinds of “likes” that I feel handicapped if I do not have a way to distinguish between.

For me there is almost no overlap between these two reactions, except maybe in the case of jokes (that’s because if I totally agree with something, most likely I did not learn anything new from it. echo-chambers are boring).

The problem is, that if I have only one “like”, I have no way to show support. One solution would be to respond with a short message that says “+1”. However here it does not work, because my response would not appear under to the original comment. Sometimes way below…

On the other hand, when I do “like” a message, people might wrongly assume that I agree with everything written there, which is often incorrect. I might like the style, interesting information or reference that was included, some new idea that was suggested, while still strongly disagreeing with some of the content.

There is this plugin:

Bored of likes in discourse? Here’s something you will definitely love. Overview Discourse-reactions is a plugin that allows user to add their reactions to the post. This plugin can engage more audiences to the post. Users who may not have...

But to get the ability to install (up to five) plugins, I’d have to upgrade my plan which would almost double my hosting costs for the forum.

pity.
BTW - which hosting is that? How much do they cost?

I think I understand the need, but I feel that I’m myself guilty of using “reactions” as a substitute to conversation.

It might be intentional in this software to force people to express in words.

A little while ago I tried to comment on a reply by the word “Nice!”, and the software rejected it, stating that replies should be 20 characters minimum.

Maybe. But did it cause you to actually go and write 20 character reply instead?
If no - then it is not working (the net effect is less activity than if they did not have this limit)

And - short replies seem to not appear directly under the replied-to message if there were newer messages in the category (at least for me (maybe I misunderstand something in the UI), so it makes it hard to track how many likes for a given message this way.

Actually, I did reply with a longer sentence.

I haven’t used Discourse before, although I was aware of the project before.

I see that it’s trying to blend both the single stream way (replies appearing at the bottom), with a kind of a thread view, where you can see the replies directly underneath the post. 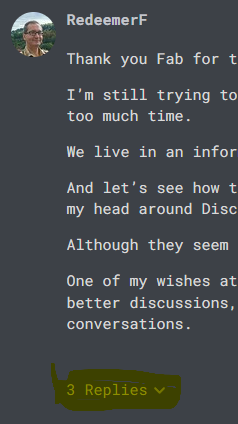 I’m still trying to discover how this works, and I like the keyboard shortcuts

pity.
BTW - which hosting is that? How much do they cost?

We can host your forum in the United States (Washington D.C.) or in the European Union (Frankfurt, Germany). We use ISO27001 certified data centers. Our EU hosting is GDPR compliant.

And - short replies seem to not appear directly under the replied-to message if there were newer messages in the category (at least for me (maybe I misunderstand something in the UI), so it makes it hard to track how many likes for a given message this way.

I haven’t noticed this behaviour at all. But maybe it’s configurable? There’s a hell of a lot of customisation you can do to make this thing behave like you want it to…

I think I might have been replying to the wrong messages due to some misunderstanding of the UI on my part.

BTW when I actually reply to the wrong message, I cannot correct it. I can delete the message, but I cannot repost it in another place, because it says that my content is too similar to “a message recently sent” (probably I’d have to wait 24 hours until it gets actually removed from the server, but that’d be a big overkill for just changing the presentation slightly)

Heck, if it comes to it, let me know and I’ll spin up another discourse instance right away. I’ve been enjoying running my own servers for email, storage and more. It would literally cost me nothing extra.

You’re in the US. We can’t do this. It would be a legal nightmare was anybody ever to send me a GDPR data request (if only because they wanted to hurt me or shut the show down). Even if you were in the EU, with current hate speech regulation being what it is, I don’t think I’m comfortable having anybody run stuff like this for me without a legal agreement that covers some of the responsibility. We are talking criminal charges here, after all.

I appreciate the offer very much, though! Thank you!

I do have to say that I am loving the old school forum style here. Yeah, I guess I’m old, but that isn’t my problem.

What does it say about me if I feel this software is modern, compared to what I was used to?

I think it’s both. Delightfully oldschool and very modern at the same time. It takes the good things from forums and modernises the rest. That’s what I like about it.