The Private Citizen 98: The German Constitution and the Virus 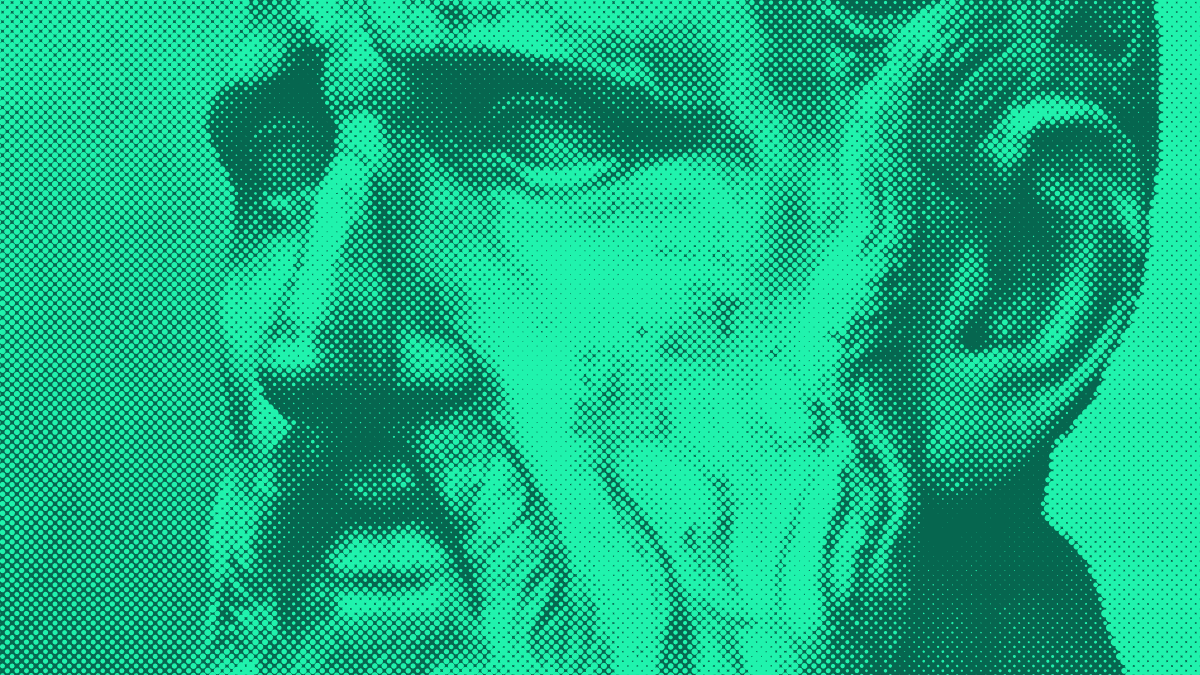 The Private Citizen — Episode 98: The German Constitution and the Virus

The German Constitutional Court has decided that the strictest pandemic measures were within the remit of the law. The government is already talking about force-vaccinating everyone. I feel stoicism is the only recourse left for freedom-loving...

No issue getting to it in the eastern USA.

I see the episode in PodcastAddict, but it fails to download with the error: 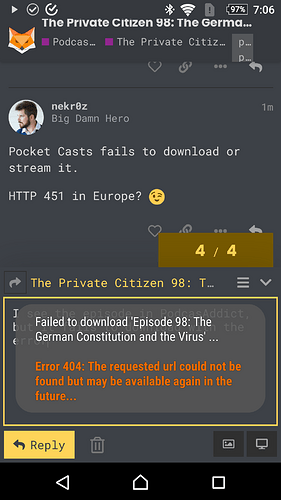 Guys! Total user error. Should be fixed now. I am sorry for this.

I got it now, and started listening, so I will try to give live feedback

When I was younger, I hear something in a song, that I later learned is called the Serenity Prayer:

And this affected the way that I approach life in general, and for me the important thing is the third: there are things that you can change and you probably should. But others can be like banging your head against a wall. And you need to be wise to know which is which.

So I finished the episode.

I can understand your frustration with the constitutional court ruling. But s you noted, if this is what the majority believes is true, so what can you do?

And this is coming from a person who decided to change where he lives because people stated to get crazier.

I have always thought that quote is unwise to the point of being a very dangerous motto to live by. There obviously are things that you can change, but that need not be changed and are better left the fuck alone

It seems that there are different versions (from the Wikipedia article) where the it’s the things you should change.

But this brings the question, who can decide what you should or shouldn’t change?

Although I tend to agree that there things happening beyond our control, which we can only face with stoicism (i.e. acceptance), but I’m not so sure whether all in all, things are worse.

Life is change, and not all change is welcome, but it does, and we have to acknowledge it, and “navigate” it.

I also understand the frustration and am myself frustrated by this. While I do not know the intricacies of the German legal system, I am not sure that the court ruling represents majority belief. In Canada, majority belief really only effects the elections. Once the party is in, they are free to do pretty much whatever they want, which usually does not include the things they promised in their attempt to get elected. Court rulings however do not follow that same path, and are instead decided by either a jury or a judge directly. In the case of this ruling, it would appear that the decision was reached by a very small representation of the population, consisting of a very small subset of the population. I would question the ability of such a group to be able to decide on something that really is as monumental as this.

But this brings the question, who can decide what you should or shouldn’t change?

Oh, that’s where the real wisdom is needed to differentiate!

Finally got to listening through the episode.

First of all, @fabsh, you’re not the only person to notice that you are poorer than your parents were. There were actual studies in the US and Europe, and the studies showed that people of our generation and younger are — on average — paid worse than their parents were when they were at this age; we also have (on average) more chronic health conditions than our parents had at the same age, and our average life expectancy is lower. Why it is so is an interesting question that I don’t have a definitive answer to, but I think the change from technical progress to sustainable development helped quite a bit.

As for the episode proper, it looks to me, from what I read and hear, that with this whole pandemic thing, civil rights started going down the drain everywhere around the globe, and continue in this direction at a frightening pace. I don’t like it, of course, and I think I agree with most if not all the things you said in the podcast. However, since there’s hardly anything I can do about it (yay, stoicism!), I’m very much looking forward to seeing how people get out of the totalitarianism that emerges. Living through these times will obviously be hard, but also very entertaining and educating, so if it’s unavoidable, I’d like to get the most out of it.

Hey @fabsh !
Thanks for your honesty and addressing the issue! I feel the same way you do.
While you are talking about this stuff, you should have played sad jazz music in the background.

It is terrible how some people call for a social division and agitate against the unvaccinated with means of “soziale Ächtung”. So-called ethicists from Germany tell us that discrimination or victim blaming is ethically justified. I can’t believe that this is really happening. This is so wrong on so many levels. The people who think this have a very questionable view of humanity and do not represent democratic values.
There is no fair discussion at all because every critic is called an idiot.
It is difficult for me to talk about this topic in public as I’m observing the chilling effect.
Also, I wanted to ask you …What do you think about Cristian Terhes’(Member of European Parliament) last speech? In a press conference held on Nov. 24th 2021, he explained why the Green Certificate is violating peoples’ fundamental rights.

civil rights started going down the drain everywhere around the globe

Yes, but not uniformly. For instance the restrictions are much more limited here in New England than where my Mom lives, Nova Scotia, Canada, and more limited still in more conservative states within the U.S. I also have family in Sénégal. My sense is that SARS-CoV-2 isn’t the cause of erosions of civil liberties there at all (however there’s rampant corruption and there was targeting of an opposition candidate not so long ago, unrelated to any viruses).

Fab asked in the episode whether anyone had seen studies suggesting reduced vaccine effectiveness after 6 months. I’d been holding onto a couple links not wanting to bring up the topic again or write too much in these forums, but here goes. First, in case my feedback is misinterpreted as coming from a largely opposing view, no, I generally agree or am undecided about his arguments – e.g. I just had an argument with my Mom saying I dislike our new mayor’s proposal to force restaurants to check vaccination status, och, and along the way making the mistake of playing with the idea, out loud, that since the government is meant to act on behalf of the people that in this case maybe we could let individuals do whatever and how well everyone makes out will be determined by how caring and informed we all are – cut out the middle man so to speak (oy, that didn’t go well).

It’s just the repeated statements that it’s only about personal risk that I take issue with. That strikes me as a possible straw man absent evidence proving the implied null hypothesis re. vaccines and transmission rate. You can cite Portugal or I could cite Vermont to say the same thing, but it’s easy to find a region supporting the opposite argument too (e.g. there was previously happy reporting on the effect of the booster on new case reports in Israel, IIRC). To be clear, I’m not talking about whether the vaccines will eliminate SARS-CoV-2 entirely but about the rate of transmission. Polio virus style eradication (the virus causing Polio is gone or dormant, right? people still suffering the result paralysis may still be around but there are no new cases?) seems to be ruled out by most everyone now. One of these links uses the term Secondary Attack Rate. That’s what I’m pointing at, the suggestion that there is lower SAR to those who are vaccinated meaning less overal spread, and, for a time, lower SAR from the infected vaccinated too.

I’ll share the links and others can tell me why these studies don’t suggest what I think they suggest. This is my interpretation:

Both these papers still need peer review, so maybe should tune in later to see what happens with that, but this is all I’ve found so far.

Another aspect I’m interested in learning more about is whether immune compromised people (where vaccination doesn’t help much or for very long) or unvaccinated people serve as ecosystems for the evolution of new strains. I heard a radio program interview a doctor discussing an infected immunocompromised patient who had multiple strains within. If I remember rightly, because the guy was isolated fairly early, they supposed that certain strains the discovered in later tests but not the early ones, ones that had been sequenced elsewhere, had independently evolved in him. It was interesting in itself, and that was most of the show, but they concluded (maybe justified maybe not, I don’t know) that where the virus can live unmolested it might more readily evolve new strains, some harmless some not. If that’s the case then that could be another thing to evaluate when asking whether being vaccinated is purely a personal risk decision (again, saying nothing here about whether the policy directions are right – I disagree with those for some of the reasons Fab gives and other reasons or feelings of my own).

Oh, since I’ve gone long anyway, what the hell is the point of curfews supposed to be? Isn’t everyone in agreement that you have minimal risk of being infected walking outside? For anyone who missed the story you’ll like this couple. I sure did: You can walk your dog on a leash after curfew, but not your partner | Montreal Gazette

We have Israeli forum members and I’m sure they can give us more precise info re the situation there. But I’ve been following the situation in Israel rather closely from the very beginning, both because I have a lot of friends there that I’m worried about, and because as a medical professional I’m curious in their policies’ results (Israel started mass-vaccination very early on, and also was one of the first countries to widely practice and enforce boosters). And the more I follow it, the more it looks like an old Soviet joke:

Another aspect I’m interested in learning more about is whether immune compromised people (where vaccination doesn’t help much or for very long) or unvaccinated people serve as ecosystems for the evolution of new strains.

I’ve actually heard talk that vaccinated people may actually be having this same effect. Where the vaccine does not prevent the person from getting sick and the virus fights back and either mutates or becomes immune to the vaccine. They compared it to the same effect as viruses becoming immune to antibiotics through the practice of not finishing your prescription. Both scenarios sound plausible.

Also, I wanted to ask you …What do you think about Cristian Terhes’(Member of European Parliament) last speech? In a press conference held on Nov. 24th 2021, he explained why the Green Certificate is violating peoples’ fundamental rights.

Thanks for the feedback! I am including it into tonight’s show, like many other replies in this thread. But I’ll have to watch that video later. I haven’t heard about that speech before and just now don’t have the time to watch it right now as I am prepping a show.