Hi there! Some of you might know me from the EscapeTheTalk.Show, so I thought who else to take the bullet and start a nerdy theorycrafting and tricks thread for Tarkov content!

I like creating tutorials for all kinds of stuff and I hope there are some fellow tarkovnerds to contribute from their sacred tome of knowledge.

I’ll start off with some of my favourite Woods sniper spots that should help you create some of the much hated bolt action quests: 5 Best Sniper Spots on Woods | Escape From Tarkov - YouTube

Oh, this is pretty cool! Not sure I can contribute yet.

But I’ll be reading this topic with interest!

I don’t really like woods, if I play at all it’s usually customs - mainly as that’s the map I have most time on so know it fairly well.

I love Woods, but I think I know where this comes from. Woods is overwhelming. I’ve been playing that map for like 200 hours and I still don’t completely know my way around. I mostly play it by running after Jonathan.

I think once you get a hang of knowing your way around woods, it can be great for loot runs or scav kill quests. I enjoy playing it, but I usually don’t queue for it unless I have a quest or play with beginner friends.

I think once you get a hang of knowing your way around woods, it can be great for loot runs or scav kill quests.

I am definitely not there yet. I still struggle to get from A to B efficiently. Sometimes I don’t get there at all because I don’t know how…

I have found some of the best and most complete maps for Customs and Reserve on reddit, including a good map of the reserve bunkers! https://www.reddit.com/r/EscapefromTarkov/comments/pk5qxk/customs_3d_map/

That guy does amazing work!

Airdrops are a thing??? 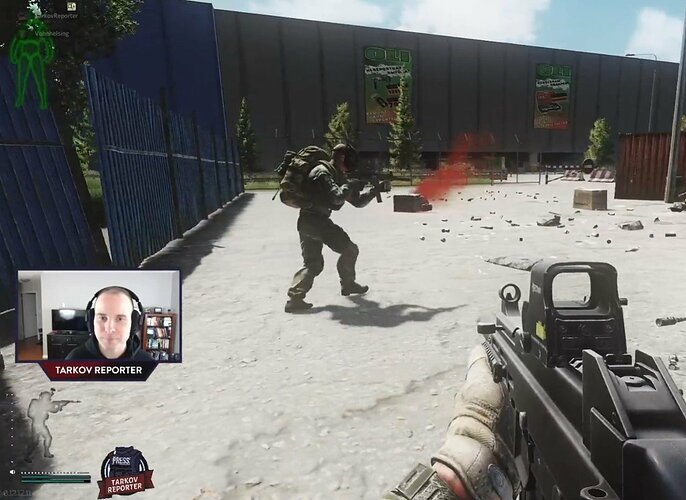 Battlestate Games implemented Air Drops into Escape From Tarkov on Dec. 30, 2021. Here’s everything we know about Air Drops in Tarkov so far.

I’ve had streams (Deadly) on today in the background as I work and I’ve seen 2 or 3 of them, big plane flies right across the map and drops a crate by parachute. I haven’t seen anyone loot the crate but I’d imagine it’s instant death for low lvl players to go near the crate!

Yeah, I learned about this from Deadly, too.

If it is anything like PUBG, everyone and their mother will be sniping you if you even attempt to get close to the red smoke.

I had a CRAZY Reserve raid yesterday, running into PMCs, Raiders and Scav boss guards and then I missed the train and almost starved to death. It’s not really that educational, apart from: don’t get yourself messed up like me, bring food! Finally made a video I wanted to do for AGES basically going over beginner weapon modding for the most important parts (flashlight+laser pointer and sights) that only require level 1 traders: Wow, thanks so much for this! I just went and built x4 of these and I think they’ll be my go-to weapon now. Cheap and effective. I also found Prapor has polymer stocks and pistol grips which can fit on and really finish it off cosmetically.

Man, I’m so happy to hear that! I mean you can slap a lot of sights on there as alternatives and a lot of foregrips or tactical devices if you find them in raid, I just use trader parts because they’re always available

I’m not sure how educational this is, but I did watch a FAB raid and drank some German pils in his honor and babbled on about choices, ammo, loadouts and Tarkov in general in the meantime: Raid Reaction: Fab's back on Woods! - YouTube

(the raid without the babbling: Tarkov: High Drama Raid and My First PMC Kill)

I return to this thread with a proper tutorial for all who might struggle to get their Shooter Born in Heaven kills on Customs! It was a lot of fun to record and I hope some people will find it useful Thanks for this, interesting video. I tried sniping from the bushes just down from the bridge shack once as it was a little less of an obvious position.

I’ve stopped playing Tarkov now, I just don’t have the time, last wipe I only got to lvl14 so never even got Flea, which was a shame as I’d saved 5-10M.

I still watch the Twitch streams though, I usually put Glorious-E on during the day while I WFH. It’s a fantastic game.

Edit: On Pestilys stream the other day there was a team of 3 sniping from the roof of the train behind that shack, maybe more visible though.

We had a lot of fun on stream finishing up my quest in tarkov to collect cultist knives, Fabsh’s least favourite type of enemy in Tarkov. He was all high on confidence from killing Tagilla earlier though, so he didn’t need too much convincing: I am honoured to actually help with tutorials. Usually I need them.